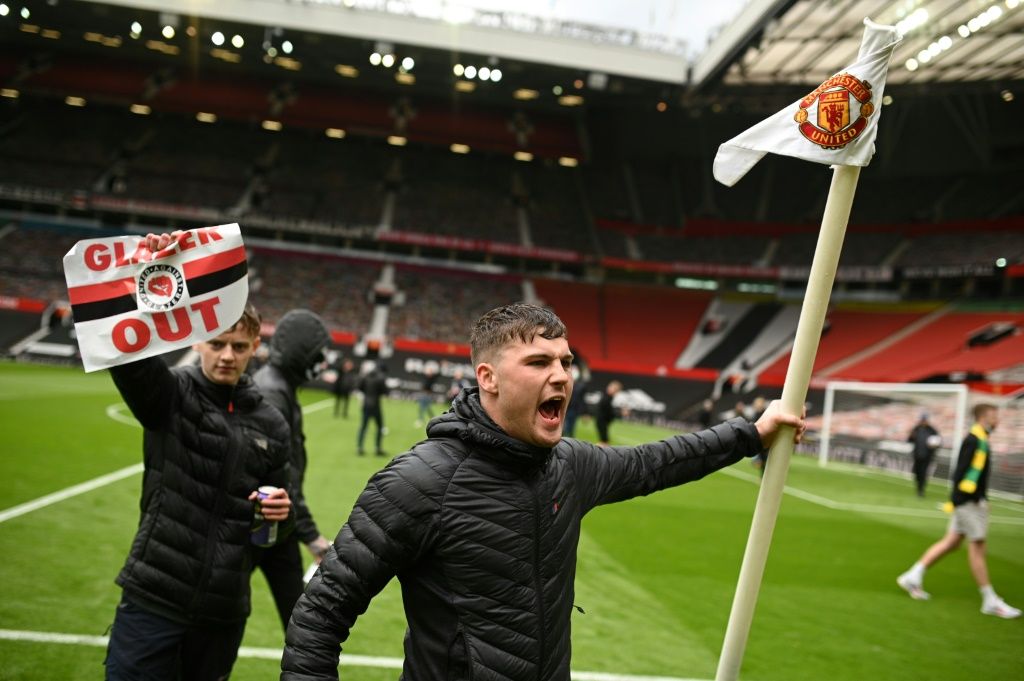 Fans invaded Old Trafford and ran onto the pitch Sunday as part of a demonstration against United’s owners, the US-based Glazer family.

The force said one officer sustained a fractured eye socket, another suffered a facial wound and a third was “dragged and kicked”.

A 28-year-old man has been arrested in connection with the incidents.

Anger towards the Glazers has been reignited by United’s part in the failed ESL project, which collapsed within 48 hours last month after a backlash from fans, players, governments and governing bodies.

The ESL sought to guarantee top level European football for 15 founder members every season without the need to qualify on the pitch.

There have been calls for all six English clubs involved in the formation of the ESL — Arsenal, Chelsea, Liverpool, Manchester United, Manchester City and Tottenham Hotspur — to face points penalties.

The Premier League said Monday it was “determined” to “hold those clubs accountable for their decisions and actions”.

It also announced plans for a new charter, with all club owners signing up to a rule “committing them to the core principles” of the league, with breaches punished by “significant” sanctions.

“The events of the last two weeks have challenged the foundations and resolve of English football,” the Premier League added.

“These measures are designed to stop the threat of breakaway leagues in the future.”

British Prime Minister Boris Johnson, speaking Monday during a campaign visit to the north-east English town of Hartlepool, where there is a parliamentary by-election on May 6, said: “I don’t think it’s a good idea to have disruptive behaviour, demonstrations of that kind.

“But on the other hand, I do understand people’s strength of feeling.

“And I think that it’s a good thing that we have been able to do things that make it pretty clear that the European Super League is not going to be appreciated by the people of this country, or by this government.”

The Glazers have been deeply unpopular since a leveraged takeover of the club in 2005 saddled United with huge debt repayments.

Hundreds of fans managed to force their way into Old Trafford, chanting “we want Glazers out”.

Large numbers of supporters had also gathered outside the team hotel, blocking their route to the stadium.

As police moved in to disperse the crowd, objects were thrown at officers and horses.

A United statement issued Monday said reports protestors had been able to access the stadium and pitch via a gate opened by club staff were “completely incorrect”.

United said protestors had broken through security barriers before eventually opening an external door that let others through to the concourse area and the pitch, with another breach occurring when the door of a disability access lift was smashed.

The statement said the “majority of our fans have and will condemn criminal damage, along with any violence towards club staff, police or other fans”.

But while United said they did not want peaceful demonstrators punished, they insisted they would work with police to identify those involved in criminal activity and would impose their “own sanctions” on any season ticket-holder or member identified.

Nevertheless, United stressed they “remain committed to dialogue and engagement with our fans through the Fans Forum and other appropriate channels”.

Manchester City could have been crowned Premier League champions on Sunday had United lost the match.

The Premier League said a new date for the match would be announced “in due course”.