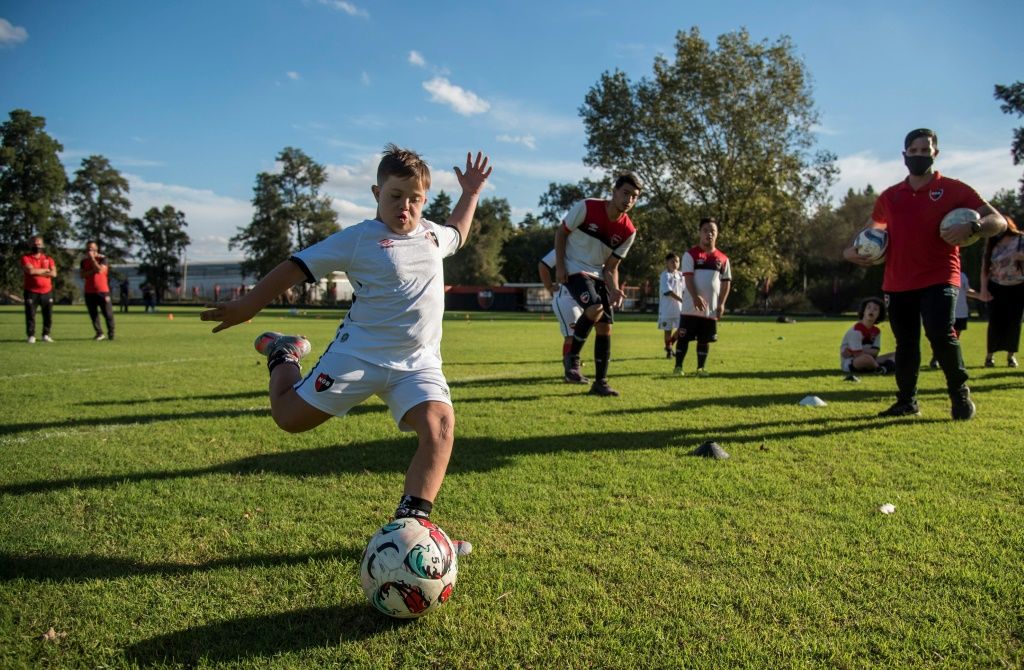 The boy is one of nine children who just enrolled at the brand new football school for kids with learning disabilities, created by the Argentine great’s childhood club Newell’s Old Boys.

“We’re a real football family. My husband played for the club, my other two sons did too and the oldest got to the fourth division,” said Stefano’s mother, Marisa Meroi.

“Stefano wanted to be like his brothers,” she said.

Now he gets to practice dribbling, passing and shooting like his football hero who was on the Newell’s books as a child.

Stefano gets kitted out in the Newell’s colors and then joins the eight other children aged from 6 to 12 with similar learning disabilities at the Griffa Sports Center used by the first team.

Based in Rosario, some 300 kilometers (185 miles) north of Argentina’s capital Buenos Aires, Newell’s are not the only club to launch such an initiative but theirs is a weekly training session that is free for the participants.

Going to training is a highlight of the day for the children, but also for the parents who watch their young players’ progress from the sidelines.

Sometimes the parents also join coaches in holding kids by the hand as they learn to control the ball. Some children shoot into an empty net before celebrating wildly.

Stefano is skilful and a natural footballer.

“He plays in another club with kids that don’t have special needs. Now he’s crazy about this. It’s amazing to have an inclusive school given the times we live in,” said Meroi.

Gonzalo Cejas is the father of Valentino, another of the school’s young athletes.

“I’m happy that he’s playing a sport. He likes playing with the ball. Right away we signed up so he could experience this. There are a lot of Nuls fans in the family,” he said, using the local nickname for Newell’s.

Silvina Casella, whose son Lazaro is in the program, says this is just one of “several sports” they’re going to try to “see how he gets on.”

Despite the fact that the school could tend to their child’s special needs, it took some convincing for Lazaro’s father to get onboard.

The city is split along footballing colors between Newell’s red and black and Rosario Central’s blue and yellow.

“We decided he would come despite his father being a Rosario Central fanatic,” said Casella.

When the session ends, Meroi and the other parents put on their masks. Covid-19 has ravaged Rosario as it has the rest of the Argentina, which has recorded more than 2.8 million cases and over 61,000 deaths.