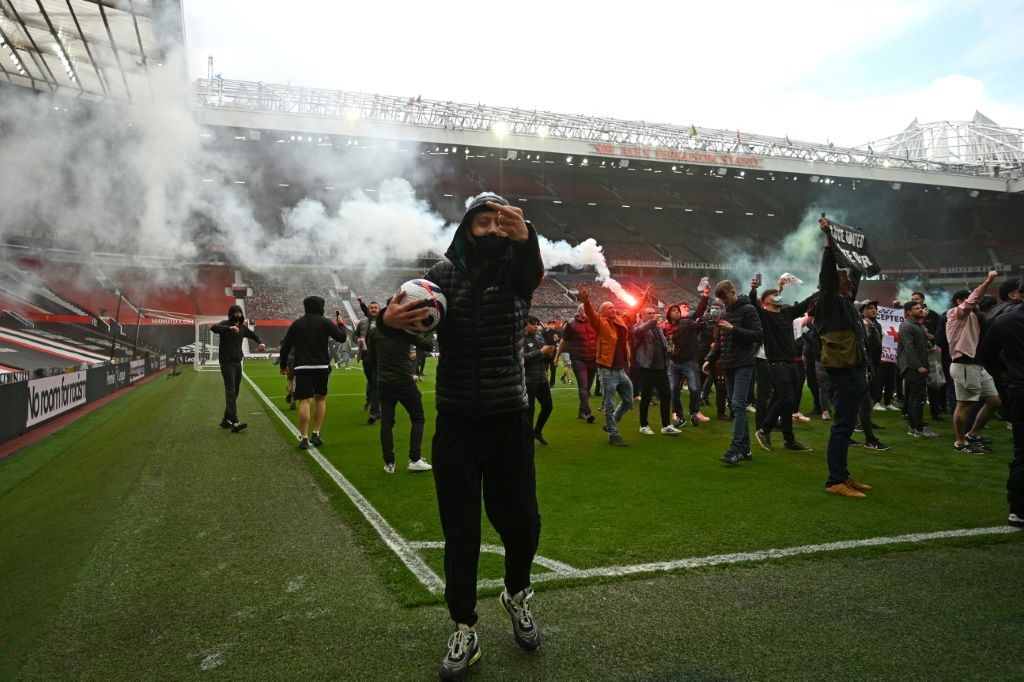 Manchester City will be crowned English champions for the third time in four seasons if second placed United lose to Liverpool.

But Pep Guardiola’s side saw their hopes of a title party put on hold for a while at least after concerning scenes several hours before kick-off at Old Trafford.

Around 200 United fans managed to get onto the pitch in protest at the club’s owners.

The Glazer family, already disliked by many United supporters, were widely criticised for their leading role in the failed breakaway European Super League.

A small group of United supporters got into the club’s training ground to protest against the Glazers last week, but this was a much more significant incident.

The protestors pushed down security barriers outside Old Trafford and ran onto the pitch.

One flare was fired towards a television commentary gantry and small sections of the turf were damaged before order was finally restored.

Both United and Liverpool’s players were in their team hotels when the breach occurred.

When another group of around 30 demonstrators got into the stadium via a different route, there were growing concerns that the match would have to be postponed for safety reasons.

As hundreds more protested outside Old Trafford, the Premier League confirmed the scheduled 1530 GMT kick-off would be delayed.

Arsenal won for the first time in four games in all competitions thanks to Mohamed Elneny’s first Premier League goal and a superb strike from Pierre-Emerick Aubameyang.

Amid growing calls for his dismissal after one of Arsenal’s worst seasons in decades, Gunners boss Mikel Arteta knows the only way to silence the critics is to qualify for next season’s Champions League by winning the Europa League.

Arteta admits he is prioritising the Europa League, so it was no surprise that only Martin Odegaard, Dani Ceballos and Granit Xhaka kept their places in the team beaten 2-1 by Villarreal in the semi-final first leg on Thursday.

Next Thursday’s second leg at the Emirates Stadium has already been billed by Arteta as the “crucial moment” in Arsenal’s season, but he hoped an encouraging display against Newcastle would provide the ideal preparation.

Arsenal rose to the challenge and were ahead after just six minutes when Hector Bellerin ran onto David Luiz’s long pass and cut his cross back to Aubameyang.

Aubameyang miscued his attempted shot but the ball ran to Egypt midfielder Elneny just inside the Newcastle area and he smashed a fine strike past Martin Dubravka from the edge of the area.

Arsenal threatened a second when Granit Xhaka’s thumping effort was pushed away by Dubravka.

Having scored his maiden top-flight goal, Elneny had a taste for another and his powerful header was cleared off the line by Miguel Almiron.

Arsenal’s 13 shots were their most in the first half of a Premier League game since 2018.

Aubameyang killed off Newcastle in the 66th minute with his first goal in seven games.

The Gabon forward has endured a poor season but he showed his class when he met Gabriel Martinelli’s cross with a superb flying volley from six yards.

Newcastle had Fabian Schar sent off in the 90th minute for a late challenge on Martinelli.