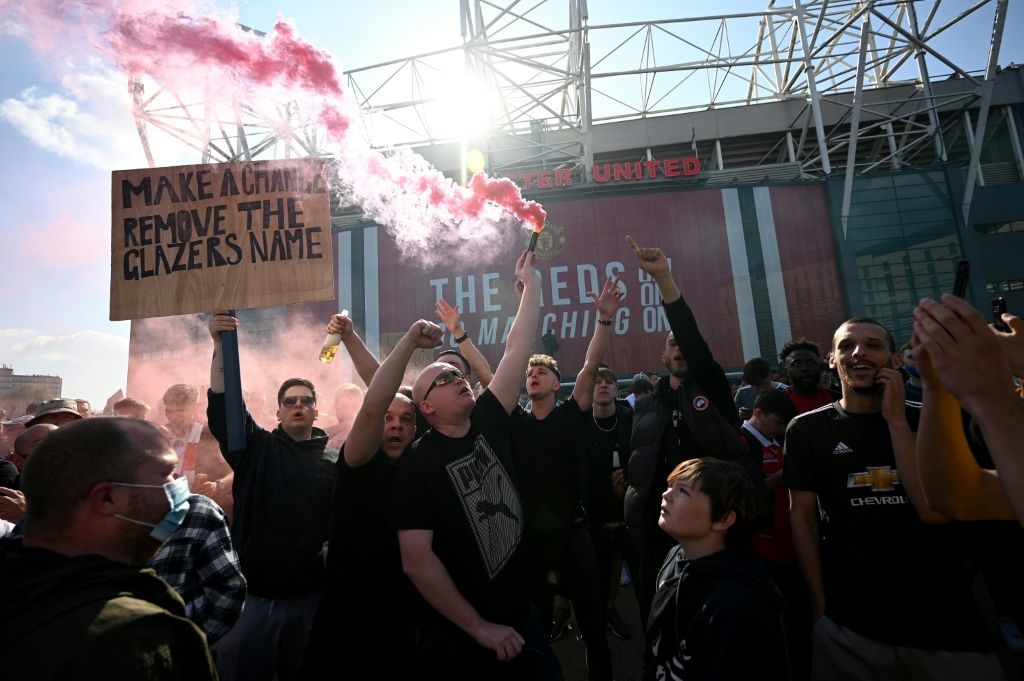 United were one of 12 clubs to initially sign up to the planned ESL, only to withdraw within 48 hours after a backlash from their own players and fans, as well as governments and football’s governing bodies.

The club’s executive vice-chairman Ed Woodward announced he would be leaving his role by the end of the year amid the fallout.

United are not in action until Sunday, when they travel to Leeds, but fans still gathered outside the club’s stadium to make their voices heard.

The Glazer family have owned United since a controversial leveraged takeover in 2005 saddled the club with hundreds of millions worth of debt.

As the English giants have paid off huge interest payments, amounting to over £800 million ($1.1 billion), in the last 16 years, the Glazers have still regularly drawn out dividends from their shares.

United fans wore green and gold colours to matches early in the Glazers reign, the colours of Newton Heath, the club founded in 1878 that eventually became Manchester United 24 years later.

Green and gold scarves and flares were back at Old Trafford on Saturday, while there were a number of banners aimed at the Glazers and Woodward.

There has also been huge protests outside Arsenal and Chelsea’s stadiums ahead of matches in the Premier League this week.

However, there was a more subdued atmosphere ahead of Liverpool’s 1-1 draw against Newcastle on Saturday with Merseyside Police estimating just 150 fans were in attendance outside Anfield.

Liverpool are also in the hands of American ownership through John Henry’s Fenway Sports Group (FSG).

FSG have been held in higher regard than the Glazers as they rescued Liverpool from the threat of administration under previous owners Tom Hicks and George Gillett.

However, more dropped points on Saturday means they face missing out on the Champions League next season.

One of the most criticised elements of the ESL was to guarantee top level European football every season for 15 founding clubs, without the need to qualify on the pitch.

“Being critical of my own employers isn’t something I do easily,” said Liverpool captain Jordan Henderson, who spoke out against the plans this week.

“People can disagree with me saying this but my opinion is that our owners have been good for Liverpool. My opinion is built on my own first-hand experiences, from the enormously privileged position of being a player and captain of this football club.

“What matters now, for the team and the club, is that our relationship with our supporters is strengthened on the other side of this.

“We must make sure we protect the close bond that’s been so critical in bringing the success we’ve enjoyed over the past few seasons. The bond between fans and players.”