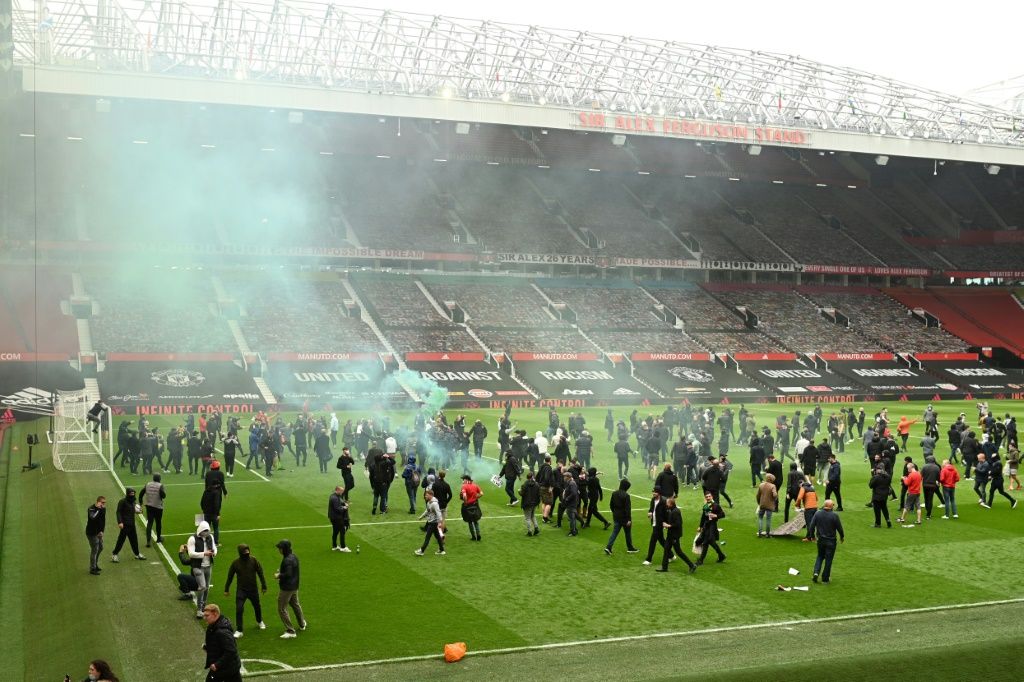 Hundreds of fans managed to make their way inside Old Trafford on Sunday, chanting “we want Glazers out”, referring to the Florida-based family that have owned the club since a controversial £790 million ($1.1 billion) debt-leveraged takeover in 2005.

It was the third protest by United fans in little over a week, following the farcical collapse of a proposed breakaway European Super League, for which United and Liverpool were reportedly two of the leading drivers behind the project.

“Let’s be very clear that no-one wants what happened at Old Trafford yesterday (Sunday) to be a regular event,” the Manchester United Supporters’ Trust said in an open letter to co-chairman Joel Glazer.

“What happened was the culmination of 16 years in which your family’s ownership of the club has driven us into debt and decline, and we have felt ever more sidelined and ignored.”

The Super League — an attempt to guarantee top level European football for 15 founder members every season in a closed-shop style tournament — was widely condemned not only by fans, but also players, governments and governing bodies.

While supporters of the six Premier League teams involved were unified in their contempt for such a  project, arguing it was nakedly motivated by greed, it was viewed by many United followers at the latest betrayal of a club founded by a group of railway workers in 1878.

Early in the Glazers’ reign, United fans wore the green and gold colours of Newton Heath, the club that eventually became Manchester United 24 years later, as a sign of protest.

A debt-free organisation before the Glazer takeover, the acquisition is estimated to have cost United over £1 billion in interest, fees and refinancing penalties during their ownership. Club accounts in March revealed current debt of £455.5 million.

Supporters disillusioned by the Glazer purchase even formed FC United of Manchester, now a club in England’s seventh tier, in 2005.

In 2010, the green and gold protest movement accelerated, with that year’s League Cup final at Wembley giving United supporters the platform to air their grievances in front of a global audience.

Those protests coincided with a dip in United’s fortunes following a run of three consecutive Premier League titles, a downturn exacerbated by the retirement of Alex Ferguson in 2013 — the last time the club lifted the league trophy.

United have been unseated at the top of the English game by neighbours Manchester City over the past decade, with bitter rivals Liverpool winning a sixth European Cup in that time and ending a three-decade wait for a 19th top-flight title.

Anger towards the Glazers has been reignited by United’s part in the failed Super League project, only months after Premier League clubs rejected ‘Project Big Picture’ — a contentious wide-ranging reform of English football backed, again, by United and Liverpool.

However supporters, who have been locked out of grounds for over a year because of the Covid-19 pandemic, on Sunday forced their way into Old Trafford and carried placards around the pitch unequivocally declaring “Apology not accepted”.

“You can buy our club but you can’t buy our heart and soul,” read one of many banners, which also demanded the German-style 50+1 ownership, a rule preventing outside investors from having a controlling stake in the club.

Some fans let off green and gold flares as others climbed onto goalposts inside the stadium before another group later appeared in the upper tier, having previously breached security at the club’s training ground in the days after the Super League proposals to protest against the Glazers.

“There’s huge discontent, not just across Manchester United fans but I think for football fans up and down the country, and I think they are just saying enough is enough,” former United captain Gary Neville told Sky Sports.