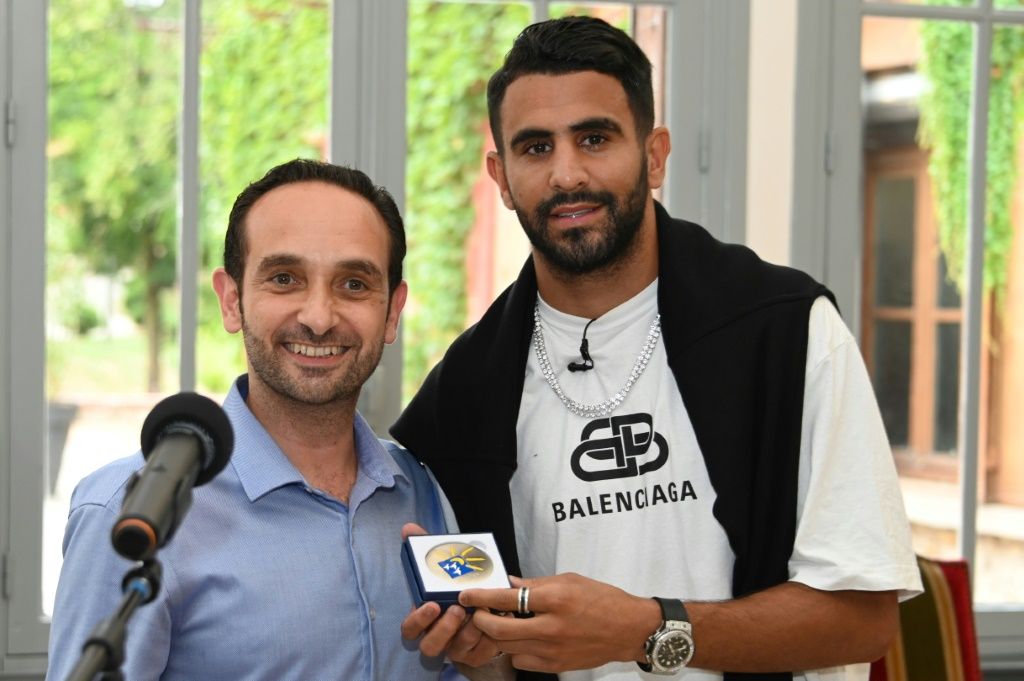 Yet his route to the top, sidestepping the usual youth academy apprenticeship, is variously described by his former coaches in Sarcelles as “unlikely” and the player himself as an “anomaly”.

Now 30, the winger has been a key player for City this season, scoring in their Champions League quarter-final win over Borussia Dortmund and playing the 90 minutes as Pep Guardiola’s side defeated Tottenham Hotspur in the English League Cup final on Sunday.

He has also won the Africa Cup of Nations with Algeria, the country from where his father emigrated to France.

Mahrez himself grew up in Sarcelles, in the “banlieues” around 20 kilometres north of Paris, and learned the game at a local amateur club, leaving a mark on those who played with him as he made his journey to one of Europe’s biggest sides.

“The only person who believed was Riyad himself,” Hayel Mbemba, who played with Mahrez at AAS Sarcelles, told AFP. “He has a strength of character which is above the average. He is football crazy, and that is an understatement.”

“He owes his success entirely to himself. He had an unwavering self-confidence. Some people might think it’s arrogance but it’s not the case,” explains Mohamed Coulibaly, who runs the local club.

The production line of world-class players coming through the Paris suburbs is remarkable and seemingly never-ending, from Thierry Henry to Paul Pogba, Kylian Mbappe and many more in between.

However, while Mahrez was always a young player with outstanding technical gifts, that was no guarantee he would make it in the game.

His former coaches recall how his frail physique seemed to work against him, but aged 18 he left Sarcelles for a trial at Quimper, an amateur fourth-tier club in distant Brittany.

From there he earned a professional deal at Le Havre, the second-division club where Pogba first played.

Mahrez spent four years in the Normandy port city before crossing the English Channel to sign for Leicester City, then in the second-tier Championship.

He has never looked back since moving to England, but sources close to Mahrez say he was “hesitant” and that he “sought the advice of his friends in Sarcelles who convinced him to go”.

It is just as well he went.

Mahrez won the English Premier League with Leicester, against all odds, in 2016 and is now on the brink of a second Premier League title in three seasons with City.

The Champions League could follow, if Mahrez can help City get the better of his home-town club first.

“His journey is something of an anomaly in football. He has beaten the odds all thanks to his technical ability,” says Mbemba, and there is a belief that missing out on youth academy coaching has allowed him to retain an element of the street footballer so rarely seen in the modern game.

“When I watch him on the television he dribbles in the same way he did when he was 10 years old,” says Franck Satougle, who once coached Mahrez.

Satougle watched Mahrez play as a kid and remembers how, even after he turned professional at Le Havre, he would come back to Sarcelles on a Sunday and play in the neighbourhood where he grew up.

“His journey is the dream of every kid in the ‘banlieues’. He is just a few steps away from winning the greatest trophy in European football despite his unlikely route to the top.”

Sarcelles may be PSG territory, but there is still plenty of local pride at Mahrez’s success.

“Riyad is a respected person with exemplary physical and mental discipline. He is a source of inspiration for the people of Sarcelles,” says Patrick Haddad, the mayor of the town. He awarded Mahrez the medal of Sarcelles in 2019.

Mahrez may be the captain of Algeria but he remains attached to the suburb where he grew up and is involved in a scheme which allows youths from Sarcelles to travel to Manchester to watch City.

A stadium named after Mahrez will be inaugurated later this year in Sarcelles.

“He is a good lad who is still a child at heart and who expresses himself with the ball,” adds Mbemba.

PSG had better watch out.