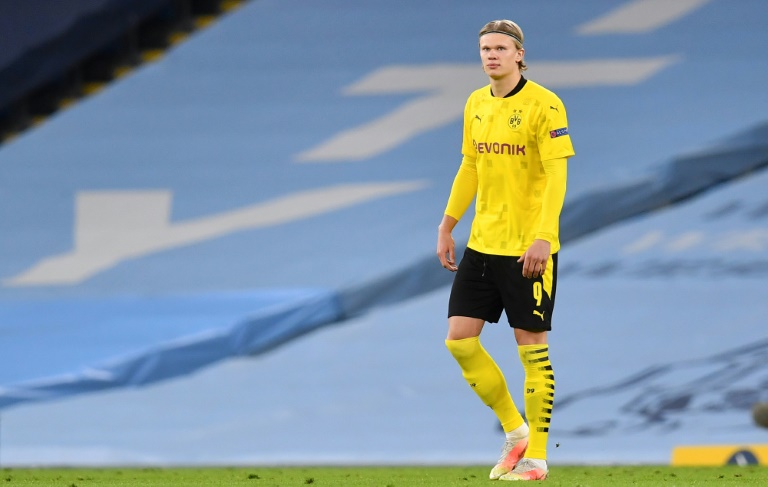 Borussia Dortmund’s Erling Haaland is being chased by a host of Europe’s top clubs, but it was the assistant referee who bagged the Norwegian’s signature after Manchester City’s 2-1 Champions League quarter-final, first leg win on Tuesday.

Haaland failed to add to his stunning scoring record in the Champions League, but did set up Marco Reus for the Germans’ vital away goal.

However, goals from Kevin De Bruyne and Phil Foden gave City a slender advantage heading into next week’s second leg.

After the match, Haaland was pursued by one of the linesmen, Octavian Sovre, in the tunnel to get an autograph.

“They told me, I didn’t see it. Maybe he’s a fan of Haaland,” said City manager Pep Guardiola.

The Romanian officials were also involved in a couple of controversial incidents during the match.

City had a penalty overturned after a VAR review, while Dortmund’s Jude Bellingham saw a first-half goal harshly ruled out for raising his boot to beat Ederson to the ball.

However, Guardiola defended their performance.

“The referees were brilliant. The game was not a problem.

“It was a penalty and after they saw on VAR it was not. After with Bellingham the action from the leg is higher than expected.

“The referees and the linesmen were correct so it was perfect.”

Sovre was also reprimanded for “inappropriate behaviour” by UEFA after a Champions League group game between Paris Saint-Germain and Istanbul Basaksehir was postponed in December.

The match was suspended for 24 hours after allegations of racism against fourth official Sebastian Coltescu.

UEFA cleared Coltescu of racism but he was banned from officiating for the rest of the season.

Coltescu and Sovre were also ordered to attend an educational programme.