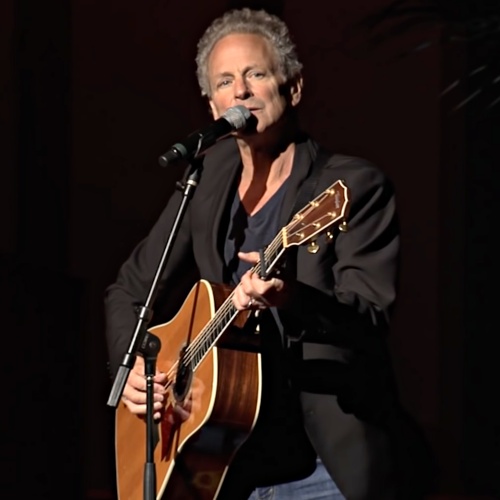 Previously, the investment company – which is run by Merck Mercuriadis – had a 25 per cent share of the former Fleetwood Mac musician’s catalogue, but the firm has now secured music publishing and songwriting rights for all 161 of his songs, including some he co-wrote during his time in the ‘Dreams’ group.

What’s more, Hipgnosis will also claim a 50 per cent share in any future releases by the 71-year-old songwriter.
As a solo artist, Lindsey has released six solo albums and three live albums.

In a statement, he said: “I was pleased to find a kindred spirit, someone who’s a big fan of my work in Fleetwood Mac, and an even bigger fan of my solo efforts.

“I look forward to working with Merck and the whole Hipgnosis team going into the future, and am confident that my body of work will be curated with great heart and insight.”

Merck added: “His work with Fleetwood Mac has brought the world unparalleled joy over the last 45 years and he belongs in any discussion featuring Brian Wilson and Paul McCartney. It’s wonderful to welcome him and his iconic songs both as a solo artist and with Fleetwood Mac to the Hipgnosis family.”

Lindsey was fired from Fleetwood Mac in 2018, and replaced by guitarists Mike Campbell and Neil Finn.

Mick Fleetwood previously insisted the ‘Go Your Own Way’ hitmakers have no plans to reunite with Lindsey.

After being ousted from the band, Lindsey filed a lawsuit alleging breach of fiduciary duty and breach of oral contract but they later settled the lawsuit.

Asked if he could see a scenario where he was welcome back into the fold, the 73-year-old drummer replied: “No. Fleetwood Mac is a strange creature.

“We’re very, very committed to [guitarist Neil Finn and Mike Campbell], and that passed away a long time, ago, when Lindsey left.

“And it’s not a point of conversation, so I have do say no.”

However, Mick insisted the group’s remaining members – also including Stevie Nicks and couple Christine and John McVie – would never try to play down the impact Lindsey has had on their “legacy”.

He added: “It’s a full drama of Fleetwood Mac, no doubt. His legacy is alive and well, and as it should be.

“A major, major part that will never be taken away, and never be down-spoken by any of us. Neil and Mike have tremendous respect for Lindsey.

“The situation was no secret. We were not happy. It was not working, and we parted company. And that really is the all of it.”