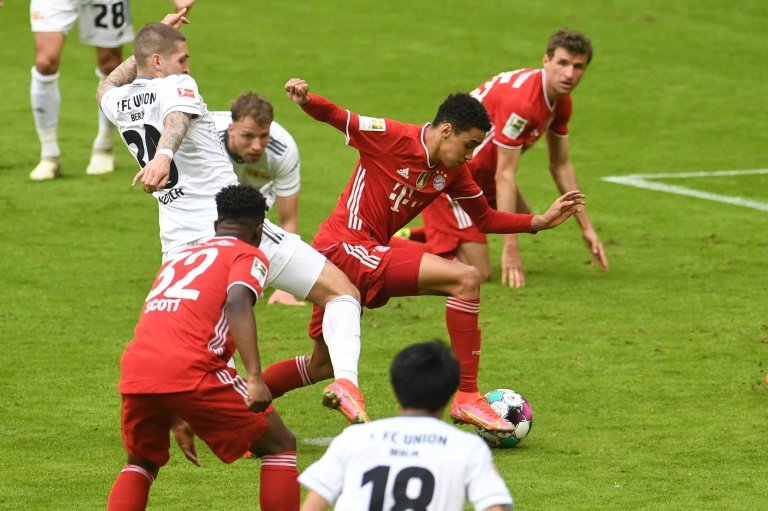 Depleted Bayern Munich were held to a 1-1 draw at home by Union Berlin in the Bundesliga on Saturday, three days before their Champions League return leg at Paris Saint-Germain.

Teenager Jamal Musiala beat three defenders to give Bayern the lead midway through the second half at the Allianz Arena only for Marcus Ingvartsen to equalise for Union four minutes from time.

“That is very annoying,” Bayern goalkeeper Manuel Neuer told Sky. “We played well over long stretches and would have deserved the victory.”

In Paris on Tuesday, European champions Bayern need to overturn a 3-2 first-leg defeat in the quarter-finals and started reserve team players Tiago Dantas, on a season-long loan from Benfica, and Josip Stanisic against Union.

The club world champions have nine players sidelined, including injured top-scorer Robert Lewandowski and winger Serge Gnabry, who was quarantined after testing positive for Covid-19.

Musiala showed great footwork to pick his way through the Union defence for the opening goal, only for Ingvartsen to beat Stanisic to the ball and grab the visitors’ late equaliser.

Off the field, tensions are brewing between sporting director Hasan Salihamidzic and coach Hansi Flick, who has Neuer’s backing.

“I think Hansi Flick is the right coach for us,” said Neuer.

The draw trims Bayern’s lead at the top of the Bundesliga table to five points ahead of second-placed RB Leipzig, who romped to a 4-1 win at Werder Bremen.

Leipzig dominated throughout and raced into a 3-0 lead as Dani Olmo gave them the lead before Alexander Sorloth netted twice.

Although Milot Rashica pulled a goal back for Bremen, Marcel Sabitzer made it 4-1 midway through the second half.

The sides meet again in Bremen on April 30 in the German Cup semi-finals.

Eintracht Frankfurt took another key step towards reaching the Champions League for the first time since 1960 with a thrilling 4-3 home win over Wolfsburg.

Third-placed Wolfsburg pulled goals back through Ridle Baku and Wout Weghorst before Frankfurt’s Brazilian defender Tuta turned the ball into his own net for an own goal five minutes from time.

The result leaves Frankfurt with a seven-point cushion in fourth after fifth-placed Borussia Dortmund, later earned a dramatic 3-2 win at Stuttgart.

Dortmund need to overturn a 2-1 first leg defeat at home to Manchester City on Wednesday in the Champions League.

Substitute striker Ansgar Knauff came off the bench to score Dortmund’s winner on only his third league appearance.

The 19-year-old, who made his Champions League debut in the defeat at City after being promoted from the reserves, dribbled clear following Erling Braut Haaland’s pass to score his first Bundesliga goal.

“It’s been an unbelievable week with my Champions League debut and first Bundesliga goal,” said Knauff. “I hope things keep going so well.”

This was Haaland’s sixth game without a goal for club or country, but he claimed two assists.

The visitors were 1-0 down at half-time, but after Jude Bellingham equalised, Haaland left the ball for Marco Reus to put Dortmund 2-1 up.

Borussia Moenchengladbach earned a 2-2 draw at Hertha Berlin despite playing 77 minutes a man down after goalkeeper Yann Sommer was shown an early red card for fouling Jhon Cordoba.

Goals by forwards Alassane Plea and Lars Stindl had put Gladbach in control after Santiago Ascacibar gave Hertha the lead with a superb strike, before Cordoba equalised just after the break.