Grenfell Athletic: a symbol of hope after blaze trauma 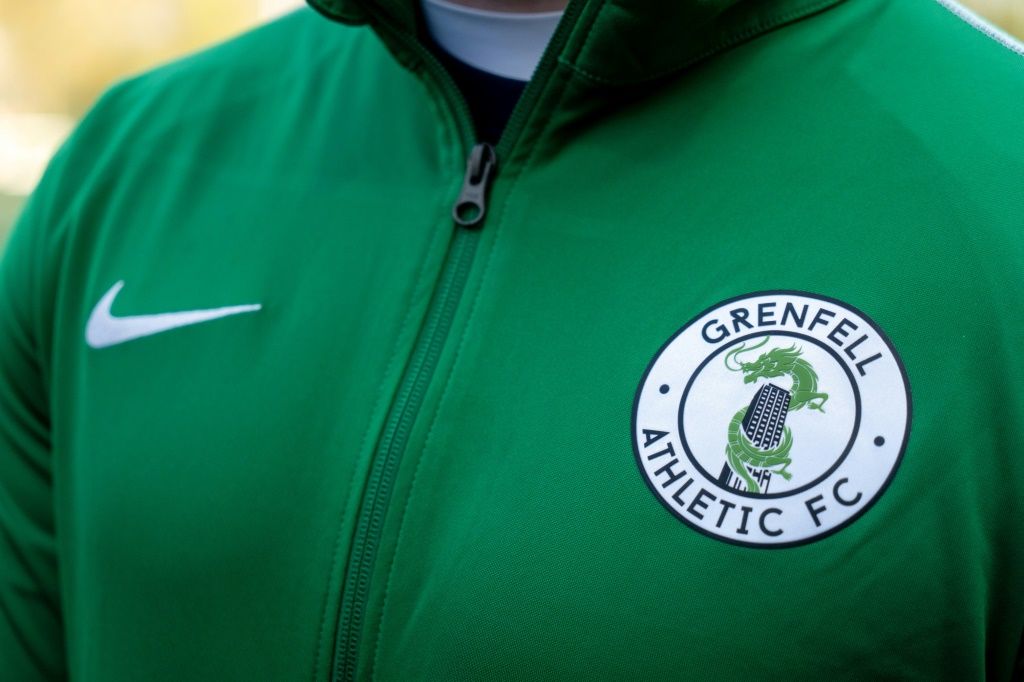 The badge used by the team, set up shortly after the June 2017 tragedy, depicts a dragon curling its way around a tower.

“The purpose of a dragon, if you look up its history, is protecting precious items or treasures,” Taylor told AFP.

“Our community is a treasure and we must look after it.”

Taylor created the team just five weeks after the blaze, building it around a “young survivor” whose mental health he feared for.

The team’s raison d’etre was “to repair a strand of what we lost”.

The 20 or so players who turn up for a training session in Paddington, west London, on a cold Thursday evening are put through their paces first by Taylor and then Dave Kitson, who played in the Premier League for Reading and Stoke.

“Rubbish, does not count, get rid of it,” says Taylor to the players while Kitson is unforgiving. “Liven up all of you,” he barks.

The training regime is similar to that of any other club, but this is no ordinary Sunday league team.

“We are playing for somebody (the victims and those who survived),” says Taylor’s 23-year-old stepson, Dillon Reilly.

“Every goal we score, every pass we make is for them.”

The players are a tight-knit group. Many of them grew up together playing football on all-weather pitches in the shadow of the tower.

Reilly talks about a friend who did not make it out.

Yasin el-Wahabi could have survived but the 20-year-old went back into the tower to try to save his family on the 21st floor — he died along with his parents and two younger siblings.

“It had a crazy impact on me, he was a huge loss,” said Reilly.

“I grew up with him and I wished he was still around. You just don’t realise the gap in one’s life till they are gone.”

Kailume Backer, an eye-catching presence on the wing, had to take time off work because his route as a garbage collector took him past the smouldering ruins of the tower.

He says, though, that playing for the team has helped him.

“We are more of a family than a football team,” he said. “It (football) helps take our minds off things, although it is also good to think about it (the tragedy).”

Kwasi Frempong sees the group as a family. He is a childhood friend of Taylor and, at 39, is the veteran on the pitch.

He describes the sense of powerlessness he felt — he stood there “frozen not gawping, frozen” as the tower burned.

“You envisage it in a movie but you do not think it would happen on your doorstep,” he said.

Frempong said he had no hesitation when Taylor rang him and asked if he would like to play for the team.

“The team has big plans in place to have a long-lasting legacy and I want to be part of it even as old as I am,” he said.

Taylor hopes Grenfell, with its unique history as more than just a football club, will eventually become everyone’s favourite team.

“How it (the team) was forged is extremely powerful and for that reason the fact of putting on the badge, I feel like a superhero,” he said.

“I believe it is the same for all the players when they put the shirt on. It is much more than just a Sunday league football team — actually this is a way of life.”

The softly spoken Taylor sees it as normal to give back to the neighbourhood he adores and where he has lived his whole life.

“I don’t believe in pride, it is one of the seven deadly sins,” said the 34-year-old.

“I had a calling at a young age to  give the community the best of me and while I have broad shoulders and two feet they will get the best of me.”