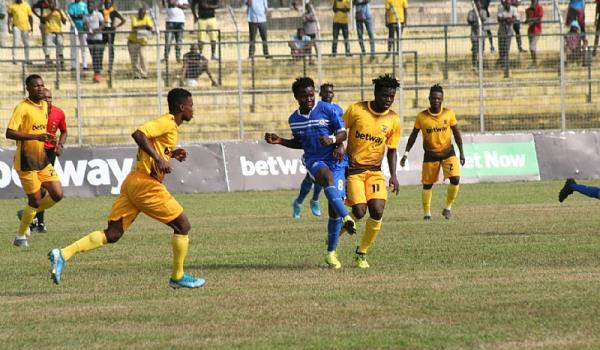 This season is Great Olympics best start to the league since the 2006-2007 season: They secured 11 points after matchday 11, which is the same points they have amassed this season.

Great Olympics have won 3, drawn 2 and lost 2 and are sitting 6th on the league table with 11 points.

‘The Wonder Club’ have remained undefeated at home this season: They have won two and drawn one.

On matchday 7, the hosts lost 2-1 at Dormaa against Aduana Stars.

In three away league games, the Obuasi giants are yet to secure a win this season: D2, L1.

AshGold’s last game in the GPL was matchday 7: They visitors came from a goal down to beat Berekum Chelsea in Obuasi.

Ashanti Gold have faced Gt. Olympics 42 times in the Ghanaian topflight league, since the Miners made their debut in the 1985-1986 season.

AshGold have won 18 times, while Great Olympics have earned 16 victories, whereas eight (8) games have ended in a draw.

AshGold have played Great Olympics 21 times at the home grounds of the Dade Boys. The Obuasi side have won 7, lost 12 and drawn 2 against the Accra giants.

They have played 28 times in the Ghana Premier League since its inception in the 1993-1994 season. Gt. Olympics have won 10, lost 16 and drawn 2 against Ashanti Gold.

Great Olympics have won their last two league meetings in Accra against the four-times champions of Ghana.

The last time Ashanti Gold won an away league game against the Dade Boys was in the 2007-2008 season when they thrashed the hosts 0-3.

Last season the Obuasi side defeated Gt. Olympics 3-0 at the Len Clay Sports Stadium. However, the season results doesn’t count because the season was truncated.