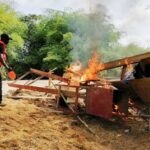 An operation to rid the country’s water bodies of activities of illegal miners ‘galamseyers’ yesterday commenced with the deployment of 200 officers and men from the Ghana Armed Forces to the Western Region.

The deployment which commenced at exactly 6: 00 a.m, on the River Pra followed President Nana Addo Dankwa Akufo-Addo’s authorisationfor the GAF to move in and“remove all persons and logistics involved in mining from the country’s water bodies.”

A statement signed and issued by the Minister of Information, Mr Kojo Oppong Nkrumah, said the decision by the President was in furtherance of the resolutions of the final communique of the Stakeholder Dialogue on Small Scale Mining held between April 14 -15, 2021.

It said it was to ensure that mining within water bodies was immediately stopped.

“The President of the Republic, Nana Addo Dankwa Akufo-Addo, has authorised the Ghana Armed Forces, to commence an operation, to remove all persons and logistics involved in mining from Ghana’s water bodies,”

The statement said the Ministry of Defence and the GAF would provide a detailed brief of developments and sustainability efforts tomorrow at about 12: 00 noon.

Meanwhile, information picked up by the Ghanaian Times revealed that the officers and men, drawn mainly from the Ghana Navy, 48 Engineer Regiment and the Special Force launched into operations by confiscating abandoned mining equipment on the River Pra.

As of the time of filing this report, the team was yet to arrest individuals involved in the illegal activities.

The government over the last few weeks had renewed its fight against illegal mining ‘galamsey’, injecting renewed vigour into the fight to bring an end to the disturbing development.

At a recent meeting with the Akyem Abuakwa Traditional Council at the Jubilee House in Accra, President Akufo-Addo indicated that even though he had embarked on a fight to deal with the problem in his first term, the result was not whatthe government wanted.

He said, however, that this time round, the government was “investing dynamism and energy” to reinvigorate the fight for the country to witness greater progress in saving the environment.

“I intend to do everything within my power in this second term to bring this galamsey menace to a conclusion in Ghana,” he assured the delegation.

The President stated that dealing with illegal mining was of great importance to him and expressed worry that great rivers such as the Birim, Pra, Ankobra and other water bodies were being destroyed, adding that the new fight would culminate in something positive.