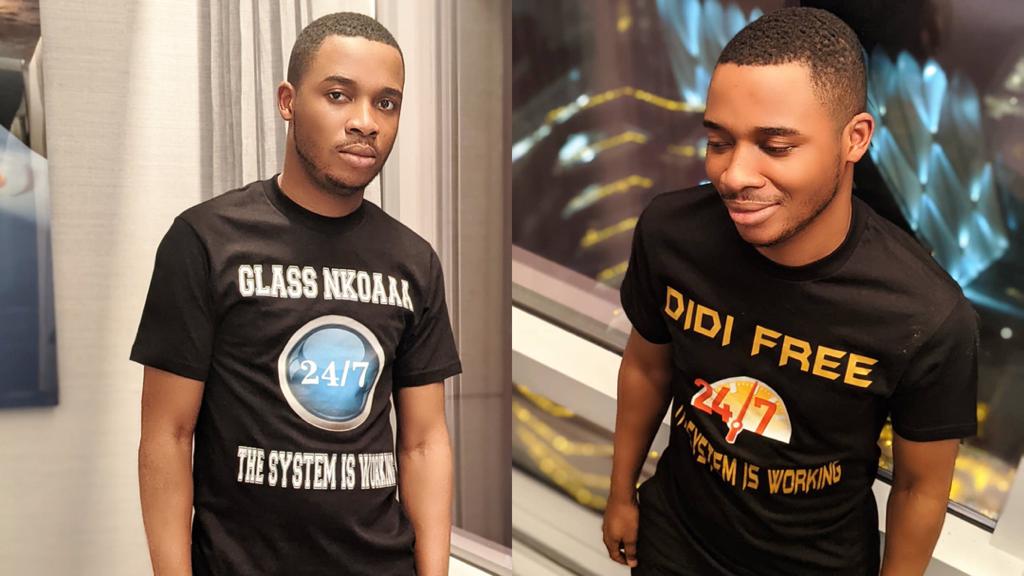 The T-shirts which are coming with some of Jonas’ popular terms like ‘Glass Nkoaaa’, ‘The system is working’ and ‘Didi free’ have been priced at $35.99 which is roughly around GH210 when converted to the local currency.

Jonas is a Ghanaian filmmaker who is currently in America and describes Ghana as a village, at any given chance as he often shares live videos to show how developed the U.S is. According to him, America is heaven and Ghana is a village because of selfish politicians.

The film director’s random and unscripted videos come off funny to some viewers because of his narrations, earning him a socialite spot in the Ghanaian social media space.

Announcing the release of the branded T-shirts, Jonas who shared photos of himself in the T-shirts tweeted information about how his followers can purchase one or bulk.

However social media ‘can’t think far’ about Jonas’ latest move and the price of the T-shirt. A twitter user, @arbeiku wrote “Sell it there in heaven. The system is not working here and we don’t eat for free. Sell it to the citizens of heaven Hw3 fom” with @thatEsselguy saying that “GTP ntoma koraa y3 sen“.

Another Twitter user, @realumarzak, wrote “so you actually want us to buy these T-shirts with such inscriptions on them and wear them here ? Making a fool of who? Ourselves? Sell them to the people in “heaven on earth “. We actually do not eat free here“.

See the tweets below for more reactions to Twene’s Jona’s tweet about his branded T-shirts for sale which has gathered over 500 retweets and more than 300 comments.