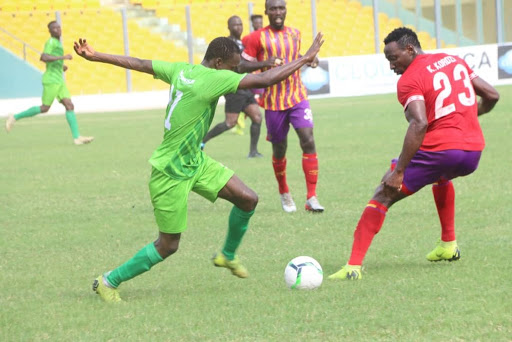 The Phobians are 8th on the league log, with 8 points, after having won two, drawn three and lost one.

Hearts of Oak have won one and drawn two of their home league games this season: Their only home victory was a 3-0 thrashing of Dreams FC.

Hearts of Oak will continue to count on the speed and trickery play of Patrick Razak as they head into this difficult tie.

The Phonians edged King Faisal 1-2 on matchday six, which was their last game prior to this fixture.

The Bechem lads are sitting comfortably at the summit of the league log with 14 points. They have won four and drawn two games.

Bechem United have drawn two and won four of their six games and are sitting comfortably at the summit of the league log.

They have won one and drawn two of their away league games this season. Their only away win was recorded at Inter Allies at the Accra Sports Stadium.

Bechem United have a very fine attacking trio in Steven Owusu and Hafiz Wontah Konkoni who have bagged five goals between them. Owusu has netted three goals, while Konkoni has two goals.

The Hunters on matchday six ended Karela’s unbeaten run this season and in an outstanding league fixture against Ashanti Gold, they handed the Miners their first defeat of the season on 27th December 2020.

Facts about the clubs

Hearts formed in 1911 are the longest existing club in Ghana

Hearts of Oak were one of the 13 teams that played in the maiden Ghanaian topflight league in 1956. They clinched the first-ever league title in 1956.

The Phobians are the only club that have played in every single league season in Ghana.

Hearts of Oak have won the Ghanaian topflight league on 20 occasions and are trailing Asante Kotoko the record holder by three titles.

The Accra giants hold the record for the highest points ever chalked by a league champion: 78 points in 2002.

Bechem United made their GPL debut in the 2011/2012 season, but suffered relegation and returned in the 2013-2014 season and they have since remained in the Ghanaian topflight league.

This is the first time they are occupying the summit of the league log after matchday six of the Ghana Premier league.

Hearts of Oak and Bechem United have played against each other 10 times in the Ghana Premier League.

The Phobians have won five, lost three and drawn two against Bechem United in the league.

The last eight games between Hearts and Bechem United has produced a winner.

Hearts of Oak have won their last four home league games against the Hunters.

This is the first time Hearts id facing Bechem United on matchday 7.

Meetings at the home of Hearts