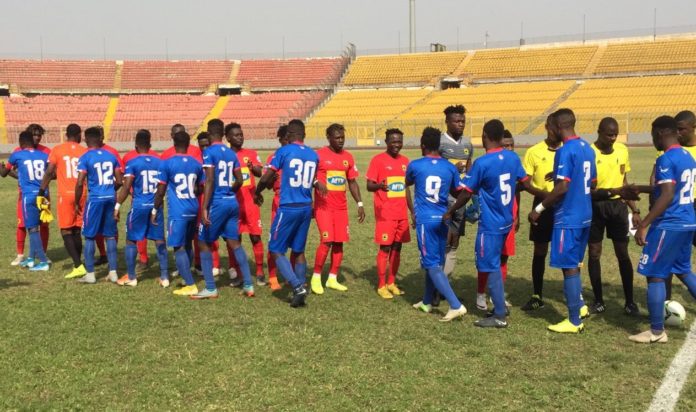 Asante Kotoko have won two, drawn three and lost one, with nine points, but have a game in hand against Dwarfs.

They have won one, drawn one and lost one of their three home league games.

The Porcupine Warriors are yet to score more than a goal this season. They have netted just five goals this season.

The Dansoman lads have won two, drawn four and lost one in seven league games: They have amassed 10 points.

The Scientific Soccer lads are yet to pick an away win, having drawn two and lost one

In 34 meetings since the Scientific Soccer lads made their debut in 1999, the Kumasi giants have won 22, drawn 5 and lost 7 against their opponents.

At the home ground of Asante Kotoko they have played Liberty Professionals on 17 occasions. They Porcupine Warriors have won 14, drawn 2 and lost 1.

Liberty’s only win at the home grounds of Asante Kotoko happened in the 2010-2011 season.

Michael Helegbe hit a brace to inspire Liberty Professionals to a 2-3 win at the Baba Yara Sports Stadium.

Asante Kotoko are the most successful club in the annal of Ghanaian topflight league, while Liberty’s best finish was 3rd place in the 2002 season.

Below is the summary of their encounters