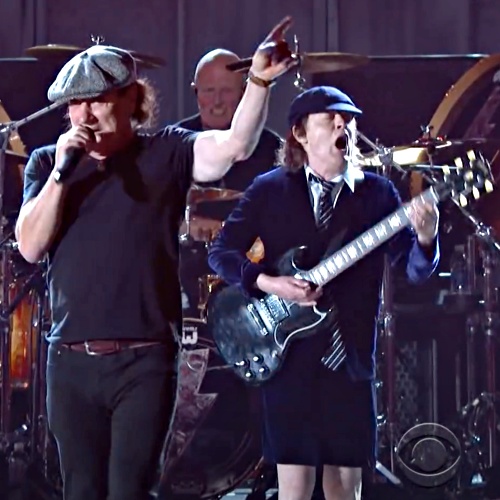 The Guns N’ Roses frontman stepped in to replace the ‘Highway To Hell’ rockers’ lead singer for the remaining shows of their ‘Rock or Bust World Tour’ in 2016, after he was forced to take a break from performing on doctor’s orders due to progressive hearing loss.

However, despite suggestions that the ‘Welcome to the Jungle’ hitmaker had been in the studio with the Australian rock legends, the band’s guitarist has insisted they never collaborated on new tunes with Axl.

Asked if they worked on any songs, he replied: “No, no. That never happened.”

It was Axl’s comments at the time that hinted they were recording together.

He said: “I feel protective; I feel I do not want to let this guy down – more than almost anybody I’ve ever known – and I don’t know why. And he’s very responsive to me. And they said they hadn’t seen him this happy, they hadn’t seen him moving around [this much]. In between songs, he’s playing other stuff [that has inspired potential new song ideas]. So that’s kind of a neat thing between musicians.”

Angus previously admitted he is “forever grateful” that Axl offered up his service to AC/DC.

He said: “So for the band, we’ll be forever grateful and he helped us get through all of those shows.”

Since then, AC/DC have reunited with Brian and released ‘Power Up’, their first since studio album since 2014’s ‘Rock or Bust’.

And, after a challenging number of years, they are here to stay and don’t plan on retiring anytime soon.

Speaking about his late brother and bandmate Malcolm Young – who passed away in 2017 after a battle with dementia – Angus said recently: “His thing was that musicians are like that band on the Titanic – they’re there to the end.

“They’re going down with the ship.”

Before getting back together over the summer of 2018 to secretly record the new record, as well as Brian taking time out, drummer Phil Rudd was replaced in 2015, after pleading guilty to a threat to kill charge and for possession of methamphetamine and cannabis, while bassist Cliff Williams had retired.